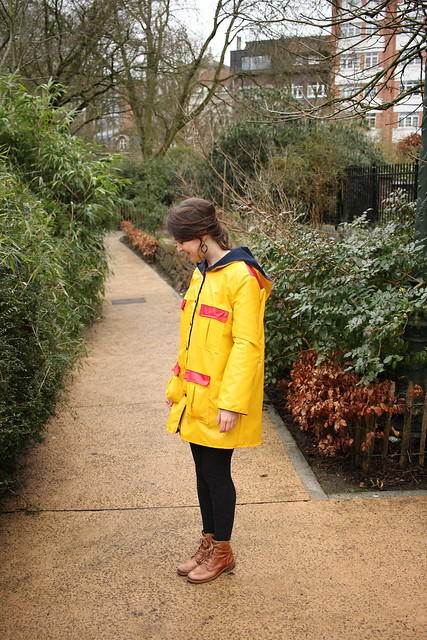 I had barely finished the final stitches of my blue plaid coat and for some strange reason I decided to plunge straight into another coat making project.

It’s interesting how we pick projects – why do we have ideas for some things and then take months to get round to taking any action, and others just spring from nowhere and the wheels are in motion before you can stop to think about it?

This particular project was the result of a few factors:

1) The fact I don’t really have a proper waterproof jacket (a bit strange considering I’m from Scotland and live in Belgium, and love cycling and being outside..). Every year I feel as if I muddle through and by the time I think of getting one it’s nearly spring. Maybe I’m not as outside as I’d like to be!
So I had thought about trying to make one but didn’t really seriously entertain the idea. I just bought some very cheap yellow and red waterproof material on a whim in Berger a few months ago with the vague idea of making one at some point.

3) Then I found out about Make My Lemonade – partly through my flatmate (who also sews, yay!). And through Jo’s post about her great Paloma shorts. Looking around on the site I found the Rita pattern which set the lightbulb off in my mind and the project was born.

So before I knew what was happening I was in the midst of making a raincoat! 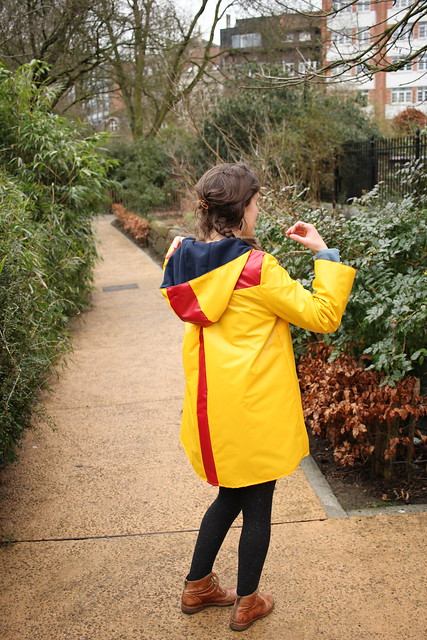 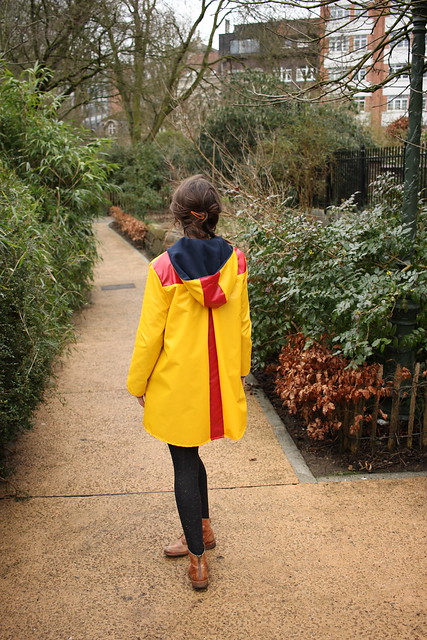 Rita is a great basic (and free!) pattern but I made some significant modifications to it: I lengthened the sleeves, added a fleecy lining, and added a three-piece hood. I really love the back pleat and yoke and wanted to accentuate them by using a contrast colour. 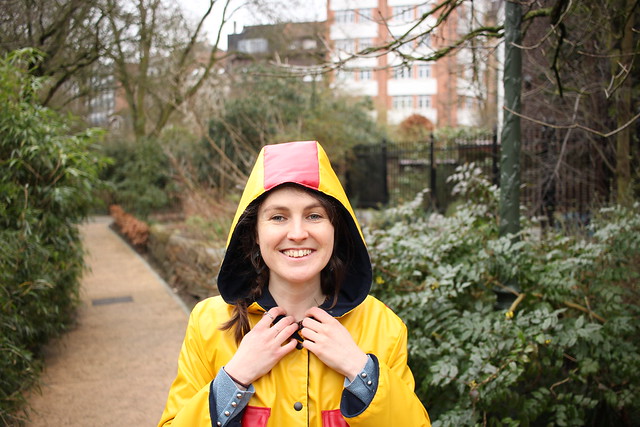 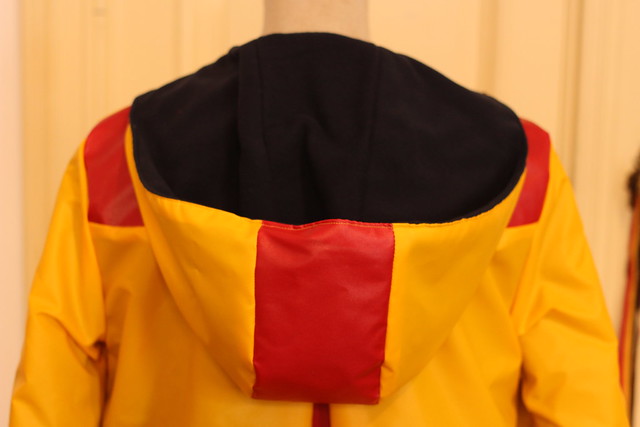 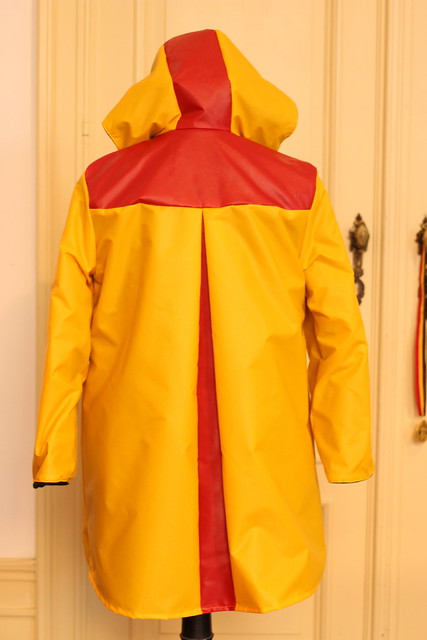 I really enjoyed working out how to sew in the lining! I can’t really explain the process properly but there are lots of great tutorials out there on bagging linings. But what I wish I had done though is cut a bigger size to take into
account the extra bulk of the fleecy lining. It’s a bit tight under the arms so I can’t really wear a big jumper with it. It’s fine with a thin jumper or cardigan though. If I make this pattern again I’ll also lengthen the sleeves a tad. 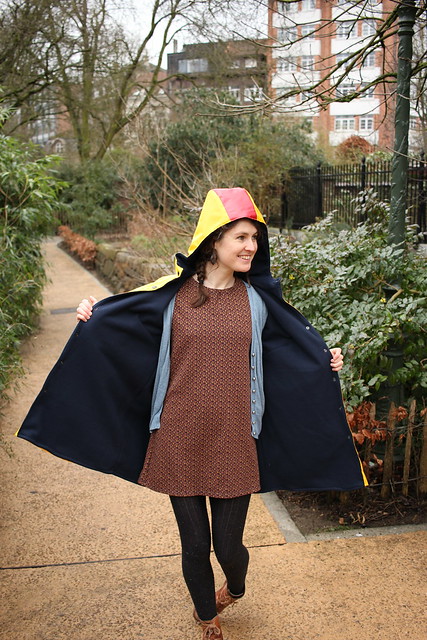 The only part which was a headache was adding snap buttons! Argh!! For the life of me I couldn’t work out how to put them on. I tried so many times but they just wouldn’t stay on the material. In the end after much deliberation (and hammering) I took the nearly-finished coat to a couturière to see if she could add the snaps on – and she did! I thought it would be better to actually pay a bit more and get the project finished properly rather than ruining it by messing up the snaps. I’d like to master snaps though myself as I’m not a massive fan of sewing buttonholes! 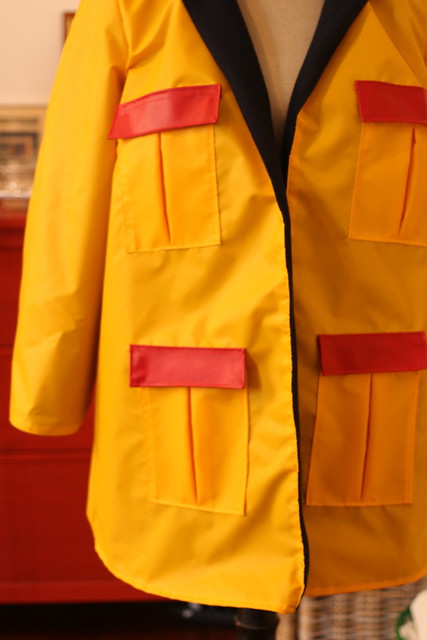 (before the snaps were added!) 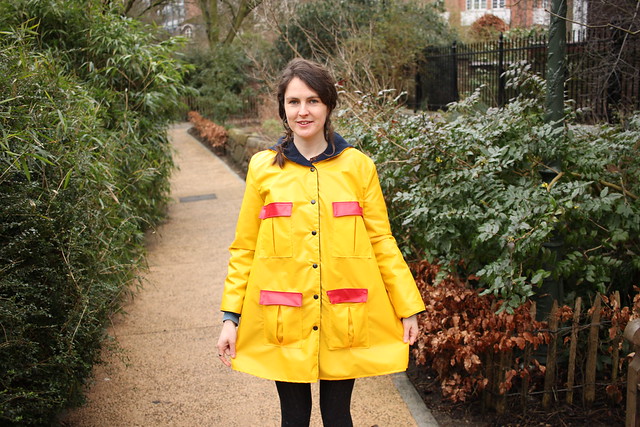 I think it is great for pottering about when it is a bit rainy but not that baltic. So far I’ve worn it in light rain mostly, and once in quite heavy rain on my bike – I was surprised that it kept my quite dry, although as it is not the best quality waterproof material I wouldn’t set off on a hike with it or anything. But if it can handle my 10 minute cycle to work that’s good enough for me. If I can get my hands on some good quality waterproof fabric I’ll definitely think about making another raincoat. It’s no North Face-type jacket but I really love it and I think this is one of those moments when you have to stop yourself from being overly critical and remind yourself that you made a raincoat. Yes! 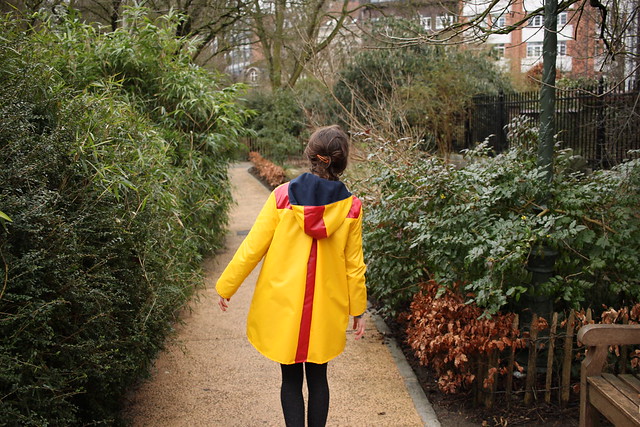