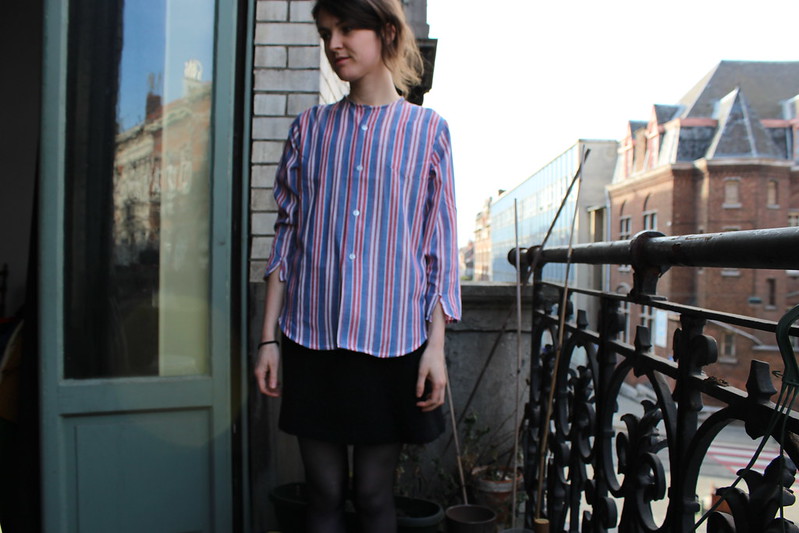 Not in any way my intention at the outset when I started mulling over ideas about what to do with an oversized old men’s shirt this week, but I ended up working on a sewing project that turned into what I’m dubbing my ‘GBSB fangirl extravaganza’. Why so I hear you ask? Well, firstly, because the three main construction/drafting techniques I used have all been featured on this series of the programme, and secondly, because the fabric bears a striking resemblance to the dress featured in the opening credits! 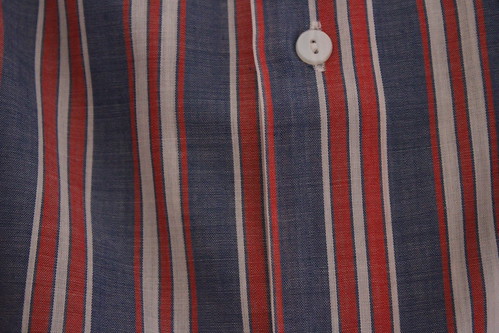 This shirt was given to me by a friend ages ago and because it was way too big it was lurking in my ‘donate or recycle’ pile. I really liked the print so I was reluctant to part with it and I knew I wanted to refashion it into a better fitting shirt. The main reason I’m becoming a big fan of recycling shirts that are too big into ones that fit is to avoid sewing buttonholes as I really have trouble working the buttonhole function on my machine – this way I can recycle the
buttonholes and buttons by positioning the front bodice pieces accordingly. 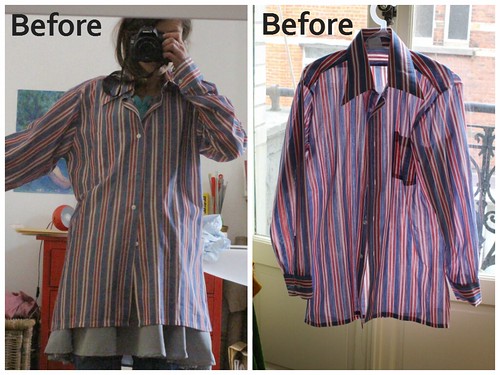 Rather than make another Violet shirt from it, I wanted to challenge myself to try something I’d not done before so I decided to try tracing a pattern off from a shirt I like the fit of, as the GBSB contestants were required to do in this week’s semi-final. This project also required me to draft a sleeve from scratch which I’d never done before, also a technique the sewers were tested on this week. And the final GBSB parallel was my first ever attempt at flat felled seams, which we saw the contestants tackle in episode 4.

Not that my efforts are in any way near the same league as Chinelo’s amazing pleats on her sleeve adaption or her organza party dress, Tamara’s yoga outfit, or the beautiful flat-felled seams on show in the child’s dungaree challenge (my favourite pair were Jenni’s!), but it did make me happy all the same to ‘take part’ like this. The programme is really well produced as the challenges and techniques are things that reflect the challenges home sewers do actually set themselves and it inspires viewers to give things a go that they might not have come across otherwise – I’d never heard of flat felled seams before, for example. But I won’t look back now – I think that the flat felled seam, like its cousin the French seam, is so useful, particularly for those of use without an overlocker.

>>>> Replicating a garment: some tips

– I had a good look at the shirt I wanted to replicate and I noted down what pattern pieces I needed. (I omitted the collar.)

– Using tracing paper and a rotary wheel I traced off each piece by laying it flat and doing my best to accurately trace from the exiting garment through to the tracing paper. You can run the rotary cutter along the seams being careful not to mark the fabric.

– Remember to add on your seam allowances to the pattern piece.

– For accuracy, measure carefully your seams on the garment with a tape measure and make sure your pattern pieces
correspond both to the garment and to each other where they need to join up.

– Depending on the garment there are a few ways to do the tracing – as we saw on GBSB – but the key is to take your
time and measure the pieces.

– Obviously the trickiest part of imitating a shirt is the sleeve as you can’t really lay it flat without cutting up the existing garment – and given that the idea is to replicate a favourite garment you’re probably going to be reluctant to do that!

– The important thing is that your new sleeve fits accurately your new front and back pattern pieces.

– I’m going to explain how I drafted a set-in sleeve pattern for existing front and back bodice pattern pieces in a future post. I think that as well as for imitating sleeves that can’t be laid out flat, this method can also be useful for when you want to draft a sleeve for a sleeveless pattern, or if the sleeve for your pattern is gathered, for example, and you’d like it to be set-in. 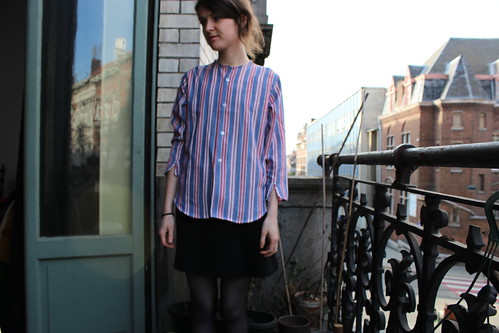 Here is a nice behind the scenes article about GBSB.

Good luck to Chinelo, Heather, and Tamara in the final!